Skip to content
But you are to hold fast to the LORD your God,
as you have until now.
(Joshua 23:8 NIV) 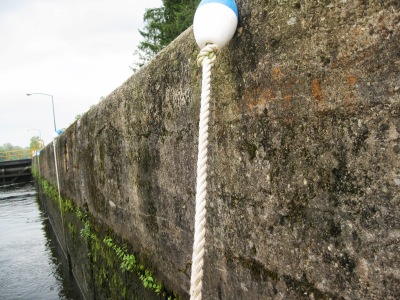 Oftentimes on a journey, we don’t know what the next moment holds.
On this journey, we have been going through several locks and each time we enter, I sit on the front of the boat, while Les drives us slowly next to the wall. I have a long hook that I grab a rope with and then I hold on while Les backs the boat in place to grab his rope. Then we both grip our ropes until the water drains or fills. Most of this trip has been locking down, but a couple time we go up to get to the water level of a lake or connecting river.
On Saturday, where our anchor held us securely near the beach, Les took the time to wash off the sides of the boat, while I walked the beach. After that we took the boat around the bend to the canal wall to tie up for a few hours. I wanted to ride the roller coaster at the old amusement park.
We ate lunch at Pizza King. Pizza for Les, a sub for me, and some hot wings Buffalo style for us to share. At the amusement park, bought tickets for each ride. We eased into the excitement with a ride on a carousel that had been there since 1896.

Then we found the Himalayan. This ride was supposed to simulate skiing, I guess. We were the only ones on each ride. We laughed so hard on the Himalayan, holding onto the safety bar keeping us in. The ride made me a bit nauseous, so we walked to a shaded area to watch the roller coaster.
I finally got my courage up and we boarded the coaster. It really was a very tame one, with two drops that were probably half of any regular roller coaster. The best part was being up on top looking down at all the boats gathered at the beach. Again Les and I were the only passengers on the ride. We each had our own car. That way I could scream as loud as I wanted, which I did. We ended our afternoon with ice cream, since the fried dough or funnel cake machine wasn’t working. 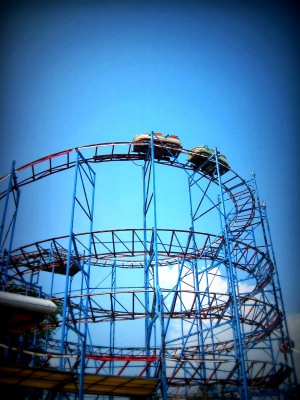 We cruised for about five miles and went up two locks. That night we decided to just tie up below the lock on the wall. It was a very quiet uneventful night, except for the light outside our boat that shone in my eyes through the hatch every time I rolled over.
Today, we woke up and decided Les would ride his bike and I would drive the boat again. It was a wonderful morning to enjoy the quiet and beauty of God’s creation. We joined up at Lock 20, got ourselves situated. We ate our lunch (taco salad) while we cruised to Lock 19.
When we arrived three or four boats that had passed me during the morning were moored on the wall. We were shortly informed that the lock was having trouble closing the western doors. We chatted with the other boaters, comparing boats and stories of why we each were there and where we were headed. After about 2 hours, they were able to get the doors closed and fill the lock with water to let us through. All five boats fit in the lock.
We each held our place, then one by one emptied from the lock like a mini parade. We had one more lock to get through before 6pm. We got to Lock 18 by 5pm. The lock master told us that the next lock was having problems as well, which we will have to face tomorrow because we were done for the day. We found a spot at the Little Falls wall to spend the night.
You never know what a day may hold.

2 thoughts on “Hold: To Maintain a Grasp on Something {Intuition Diaries}”

I love a dialogue. Be the first to start a discussion! Cancel reply